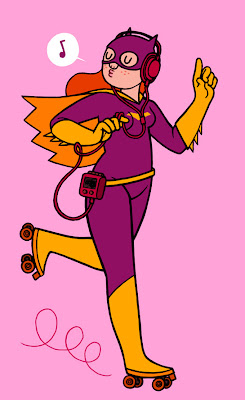 My exposure to Batman was pretty much through Batman: The Animated Series during middle school; I watched it religiously every weekday afternoon. Batgirl was one of my faves (the Barbara Gordon Batgirl), so of course I relished Batgirl: Year One when it came out. I looked to the old TV series' Batgirl costume for inspiration on this one (hence the bright purple). There were some early attempts to make her suit sparkly, but my Photoshop skills were, um, under par. Oh yeah, and she's on roller skates.
Posted by maris wicks at 3:48 PM

Love it! Your superheroes are always having such a good time. I want to hang out with them!

I would totally hang out with Batgirl and Aquaman...I'm not sure about Batman. He might think that I joke around to much (I can totally picture Batman saying, "I can't take you anywhere!!" in response to my potty-humor).

There is something totally beautiful about the solid linework and the awesome colors on this. Not to mention the motion. I love this drawing. Really great work.

hey maris, you going to the boston comiccon? its this weekend. ive got a table. come say hi!

Adorable. When I was a kid I had a monster crush on Yvonne Craig as Batgirl. *sigh*

thanks everyone! I heart Batgirl. I did a Wolverine redesign for the latest Project:Rooftop contest; I'll be posting that soon!