I can haz a life?

Last weekend, instead of partying for Halloween, I decided to partake in a new level of nerdi-ness: Descent: Journeys in the Dark. More like descent of my social life...sort of. I played with a group of friends that spanned high school, college and post-college; we all had yummy snacks and sat down to six hours of candle-lit nerdery. So I guess it was one of the more social things I've done lately. It ended up being pretty fun, not because of the game, but because of the company (I laughed so hard I cried towards the end). Well, I'll cut to the chase. Here's me as the character I played as: 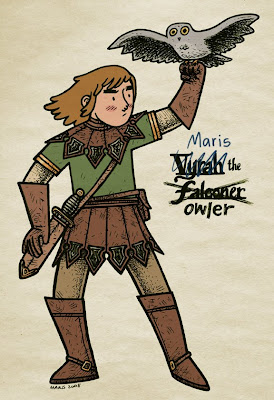 I like owls better than falcons, so pretended I had an owl instead. Whatever, it still gave my enemies armor -1 when ever it was around. And, in case this wasn't enough, here is Joe as his character.
Posted by maris wicks at 3:21 PM

what a lovely owl!