Well, 2013 sure is flying by.  Apologies for the lack of posts...here's a quick update of what's been going on:

Stuff that came out: 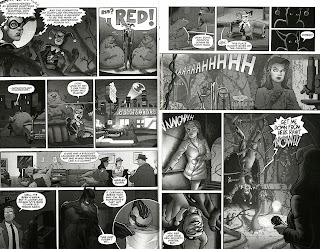 Batman Black and White #1
I wrote an 8-page story (drawn by Mr. Quinones) in this amazing anthology!

Batman '66 #3
I was the colorist for Joe Quinones' Joker story (written by Jeff Parker).

M.I.C.E. was AWESOME!  I love that we've got a great little local comics expo in the Boston area; thanks to everyone who stopped by to say "hi" or came to my panel/workshop!

I got to color this sweet RoboCop cover that Joe did for NYCC (we've been collaborating a bunch recently, can you tell?): 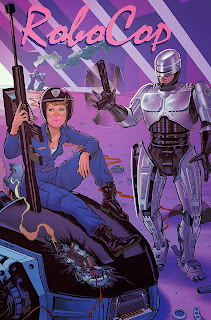 New York Comic Con!  I will be there Thursday and Friday!  I don't have a table in Artist's Alley, but I will be doing signings at First Second and Boom! Studios.  Here's the schedule:

Other than that, I'll be walking around the con on those two days...

And a big giant thanks to everyone who has bought/read Primates!  I'll have some news about the next big project I'm working on soon (along with some updates about some fun little projects)!  Okeedokes, I think that's it (for now)!

Maris! You won't be doing commissions this year? :(