This one was for a commission. I really heart the Batman cast of heroes and villains, and I was super-excited to draw Poison Ivy. I always found her character (as well as Catwoman's) interesting; I liked that they were both conservationists...(or, at least that was kind of how they were portrayed on the animated series, which was my gateway drug to the Batman universe). Their characters always seemed to have good intentions (Catwoman's theft was very Robin Hood-esque; stealing from the rich to give to the poor), but their good intentions often turned into acts of eco-terrorism (hello, poisonous plant bombs!). Philosophy aside, the villains of the Batman universe are just plain fun to draw! 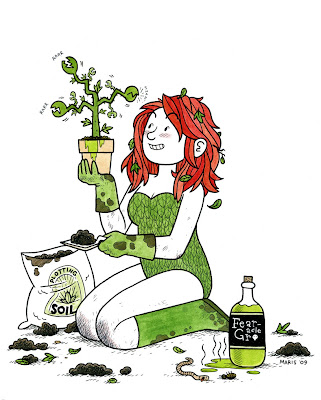 I love your puns - "Plotting Soil" and "Fear-acle Grow." Too funny!

that is too cool!

Awesome. This is gonna be the 4th wallpaper I've created from your work!

And I'm glad my puns are appreciated, Christina!

oooooo...the Villian Hero series of these drawing are so much fun! I love this style...simple AND detailed, so warm to look at!

Sorry I suck at leaving comments in a timely matter...